The Museum has a variety of hand and horse drawn apparatus dating from 1725 to 2004. 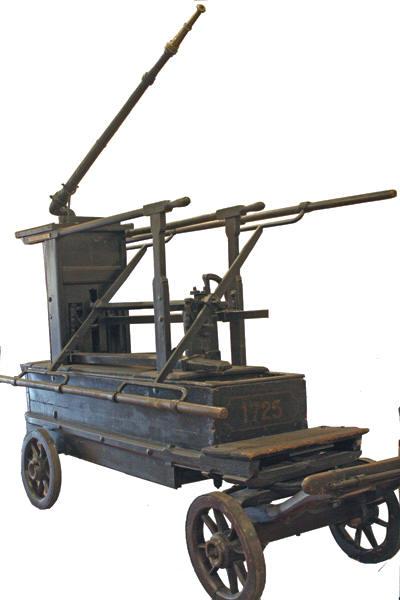 Richard Newsham patented this style of engine in 1718. His company built most English fire engines during the 18th century. The American colonies imported a large number of Newshams for their own fire companies. The engine uses a twin cylinder single acting pump equipped with an air chamber. Because reliable hose was unavailable in the 18th century most Newsham engines used a metal spout like the one shown or used a short length of leather hose connected to a branch pipe. Water was provided by a bucket brigade which emptied buckets into the hopper at the engine’s rear. 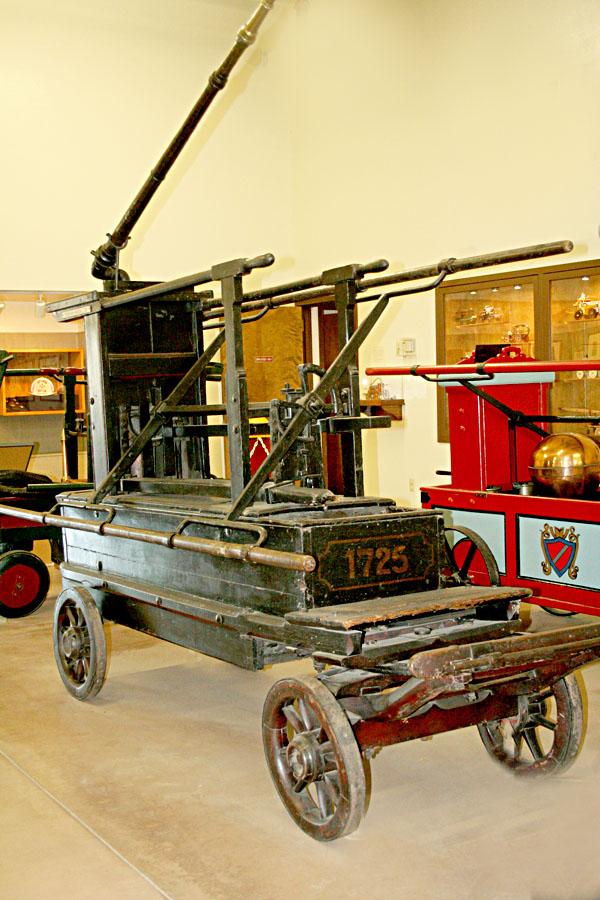 The engine also came with a suction fitting which could draft water from a cistern or portable dam. A lever allowed the engine to use either buckets or suction, but not both at the same time. Pump handles called brakes powered the pump. A pump of this size could employ about 12 men. In addition a pair of treadles mounted to the pump’s quadrants could be moved up and down by two or three men standing upon them, grabbing the two horizontal bars for stability.

This type of pump with treadles was called a bedpost style because of its resemblance to a bed. The pump could be pulled by hand or loaded onto a wagon for horse drawn transport. Newsham pumps were very well made and often remained in service for many decades. This machine was purchased from an antique dealer in London who had no real information on its use and origins. It can pump about 80 gallons of water at a rate of 60 strokes per minute. 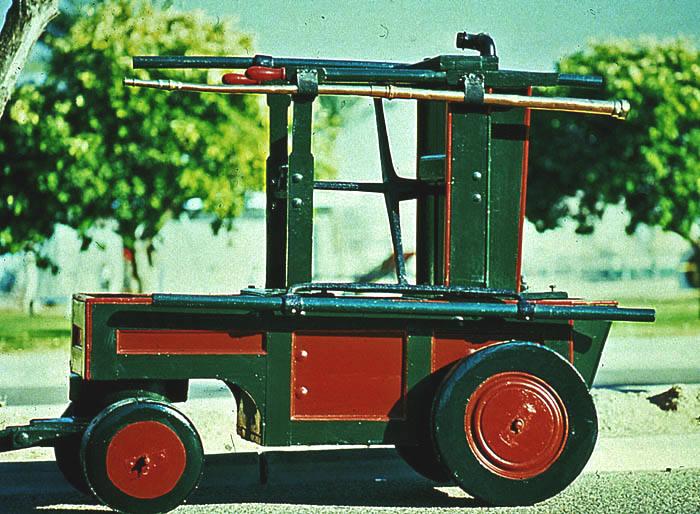 This is a smaller size Newsham engine. Its principle of operation is identical to the one before, but it lacks a pair of treadles. It spent its working life in England and came with essentially no provenance from a London based antique dealer. 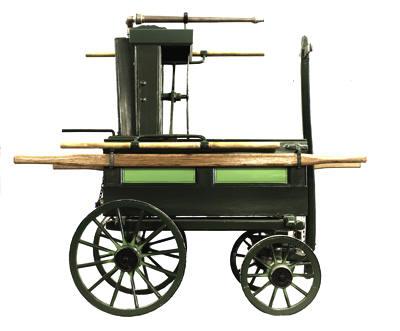 This is what was called an estate pumper because of their popularity with the owners of large estates. England lacked municipal brigades until the 1860s. Until then insurance companies provide most of the nation’s fire companies. Industrial fire brigades were common, and many large churches established brigades.

Estate owners also organized fire brigades which they commonly made available to villages near the estates. This engine was pulled by hand to the fire. Firemen then lifted the tub and pump from the chassis and carried it into the burning structure or to some other position of advantage. Water was dumped in the open tub by buckets, and could be played directly on the fire.

This was much more effective than relying on a pipe to direct water through a door or window onto a fire. We know little about the engine’s use, beyond the fact that it spent its entire working career in England. 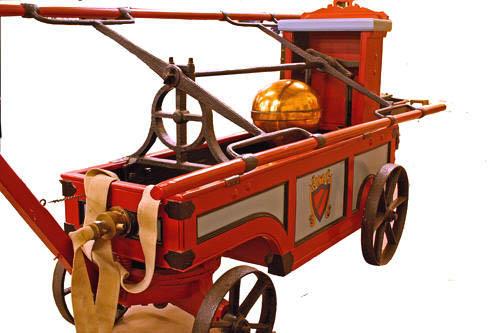 This is another English pump with a limited provenance. It was built around 1820, when reliable riveted leather hose was available, since it has only a single discharge pipe with no provision for a rigid branch pipe. Museum restorer Don Hale found the legend “Simpson … Pimlico” at the engine’s rear.

It is more lightly built than our Newshams, but is sturdy enough. It has the advantage of an easily accessed valve housing to replace the leather valves which allowed the pump to draft and discharge water. A Newsham required a complete pump removal to replace its leathers. 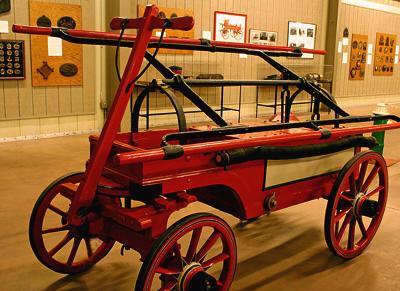 The firm of Merryweather purchased Newsham’s old company and continued to build apparatus until the 1980s. This is a compact and very well built engine that was popular with industrial and estate brigades. It could be pulled by hand to a fire and could pump about 60 gallons per minute on a fire, using leather or linen hose. It could draft water or be supplied by buckets. 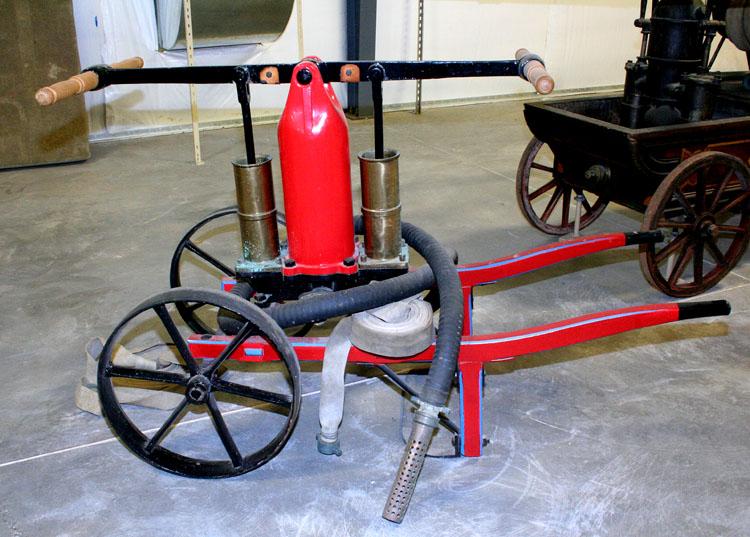 Merryweather built this portable engine from around 1880 until well into the 1920s. A small twin cylinder pump with air chamber , suction side and discharge side was mounted on a wheelbarrow style chassis. During the 1920’s Merryweather mounted them on the side car of a motorcycle. Two to four men could pump about 20 gallons per minute. 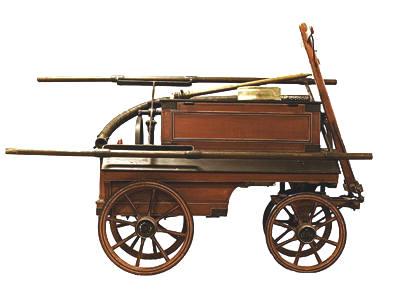 Shand Mason was England’s second largest builder of apparatus in the 19th century. This medium sized engine could pump about 60 gallons per minute. The bin atop the chassis could contain several hundred feet of hose.

This engine’s design appeared in the 1820s when James Braidwood, Fire Chief of Edinburgh and later London, introduced this design with a tub lined with copper containing a compact two cylinder pump and air chamber. Atop the tub is a bin containing hose and accessories. Larger versions of the Braidwood style were pulled by horses. The firemen sat atop the bin. Braidwoods were built in a wide range of sizes. This hand drawn engine is on the smaller side, but still required a crew of six to ten firemen. Some Braidwood engines required forty firemen to drive the pump.

Linen hose was preferred because it was much less costly than leather hose, was much easier to handle, and required much less maintenance. On the negative side it was much more fragile than leather hose and tended to leak until the linen yarn was saturated by water. This engine was used at an English estate. The paint is largely original. English fire brigades did not usually decorate their rigs in the American style. 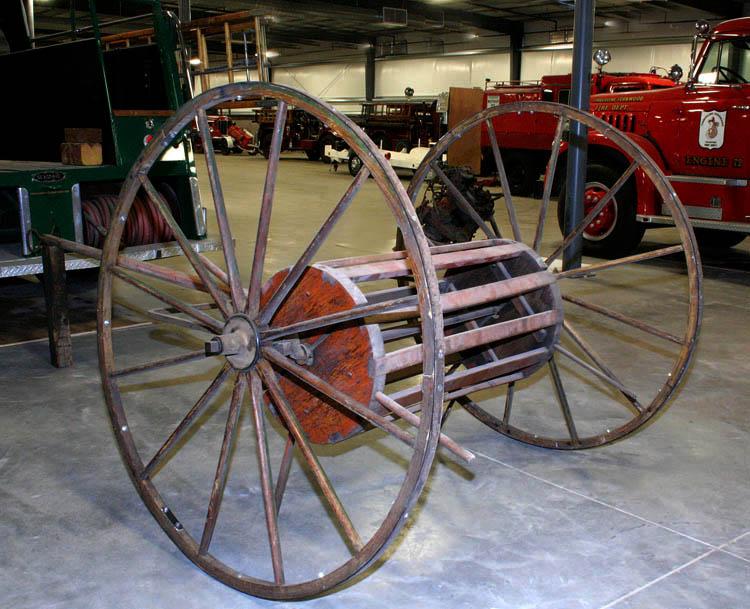 The same craftsmen who built the 1850s era ladder wagon in this collection also built this hose cart. The cart and wagon accompanied a Rumsey village fire engine purchased around 1865 by the Centerville volunteers. This is by far the earliest hose cart in the collection. 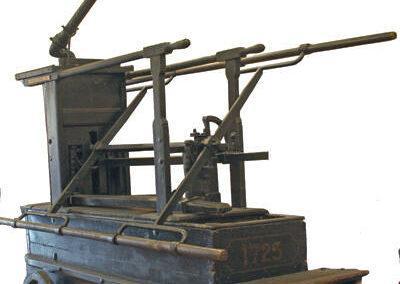 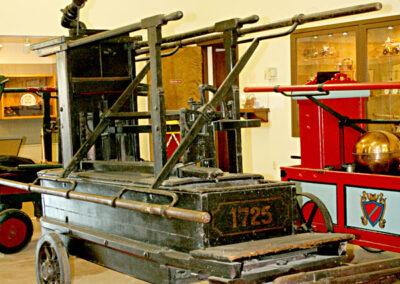 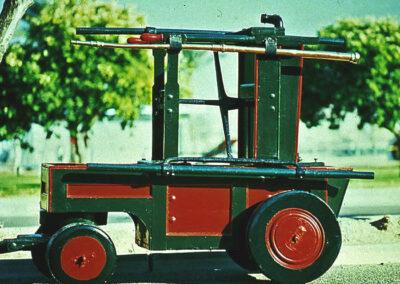 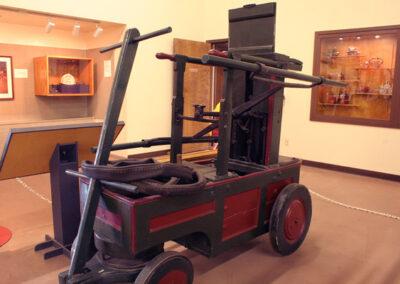 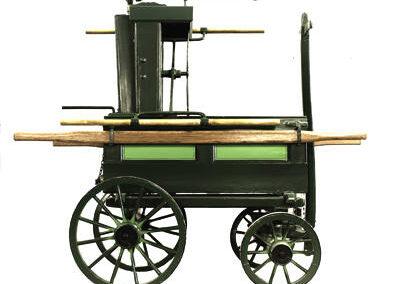 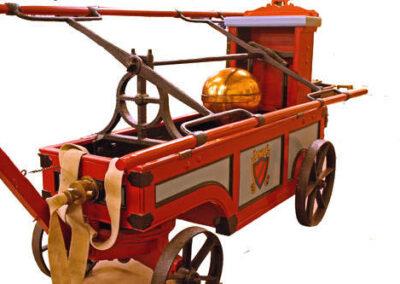 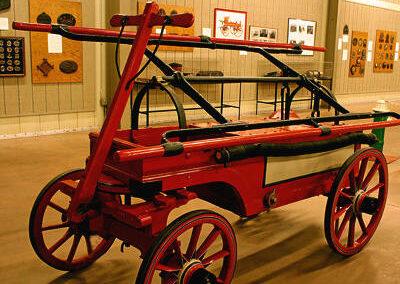 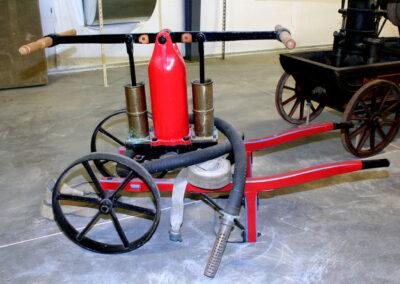 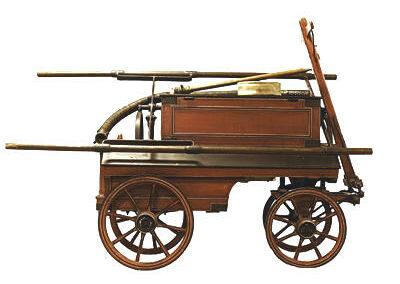 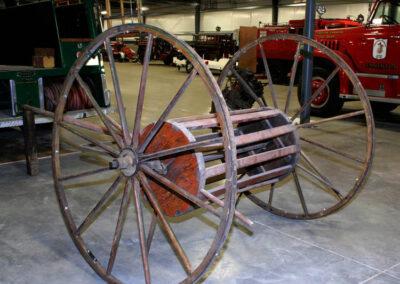 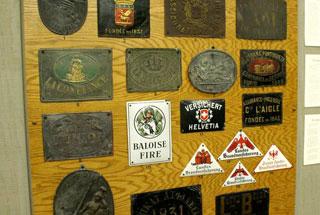 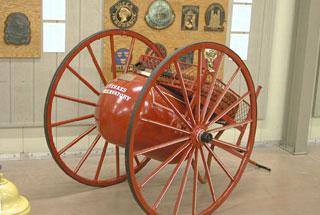 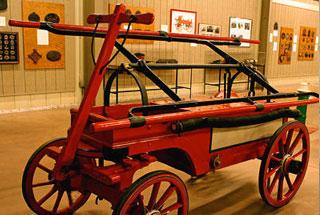 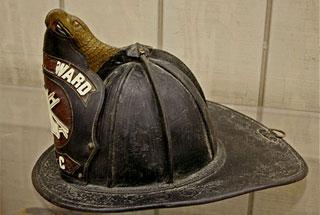 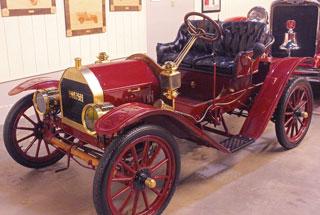