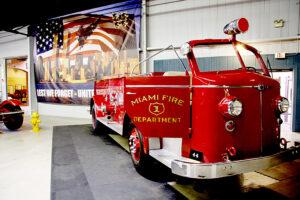 American La France introduced the model 700 in 1946.  The cab forward / midship engine model increased maneuverability, allowed easy access to the pump and engine, and seated a full engine company. This made it unnecessary for crewmen to ride to the fire on running boards or the rear “step”, a practice which killed hundreds of firemen.  Soon all American manufacturers copied the “cab forward” style.  It continues to dominate fire engine design.

This rig was used by the town of Miami, Arizona.  It was in service until about 1985.  It has American La France’s largest engine, the V-12, and a 1,250 gpm pump.  It has unusual swivel connections for its suction hoses that allow the pump  to be hooked up to a hydrant in a shorter time than the usual method.  It has a complement of other equipment, which has been removed to make boarding the engine more convenient. The city of Miami, Arizona donated this fine fire engine to the Hall of Flame in 1996.