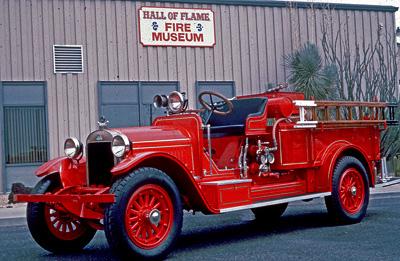 The famous auto maker and racer also built fire engines.  Stutz began his fire engine business in Indianapolis in 1919 and built engines and ladder trucks until the Crash of 1929.  This rig was his smallest model.

The town of Havre de Grace, Maryland bought it in 1924.  In 1935  they traded it to the New Stutz Fire Engine Company, successor to the original Stutz firm.  (This engine has also survived and is now on display at the Fire Museum of  Maryland).

The New Stutz people replaced the original hose bed with a combined hose bed and 350 gallon booster tank and sold it to the Indiana town of Farmland, which used it until 1950.  In 1982 Mr. John Allen of Indianapolis donated the rig to the Hall of Flame.

It was in very bad shape, and lacked a motor. It has been refurbished to its 1935 appearance with a  1933 Continental drive train from a REO fire engine.  In 2001 the Farmland Fire Department donated the rig’s original bell, allowing us to bring the engine back to its 1924 appearance.