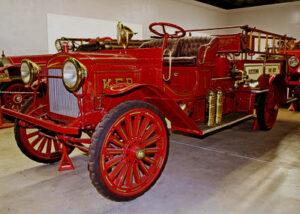 The Brockway Truck Company of Cortland, New York built a few fire trucks such as this light duty rig purchased by the town of Kutztown, Pennsylvania.  It was restored in 1985 by Don Hale. Few commercial truck makers built fire equipment because it couldn’t be mass produced.  After about 1920 Brockway confined itself to making chassis for companies which specialized in fire apparatus.

It is worthwhile to compare this rig with the 1924 American La France Chemical Car from the Atchison, Topeka and Santa Fe Railroad.  Both trucks have identical purposes and equipment, but the American La France cost over twice as much as the Brockway.  The ALF, however, has a much more rugged engine and frame, well matched to the 650 pounds of weight of the chemical tank, plumbing, and booster hose, plus the 800 to 1,000 pounds of large diameter hose in the hose bed and the 600—800 pounds of firefighters riding the tailboard.  The Brockway is too light and underpowered for this equipment.  It has a lighter chemical tank and could carry only a few hundred feet of hose, plus a crew of four. It was minimally acceptable for the few runs generated in such a small community over the course of a year.  On the plus side Brockway parts were readily available.  It was also as much of a rig as a small volunteer department could afford.

The museum owns another Brockway that was built in 1921 as a half ton pickup truck called the Torpedo.  American La France purchased Torpedo chassis, equipped them with a variety of chemical tanks, and sold them at affordable prices to small departments.  Our Torpedo was sold to the town of Lookout Mountain, Tennessee.  It’s on exhibit in the museum’s wildland firefighting gallery.