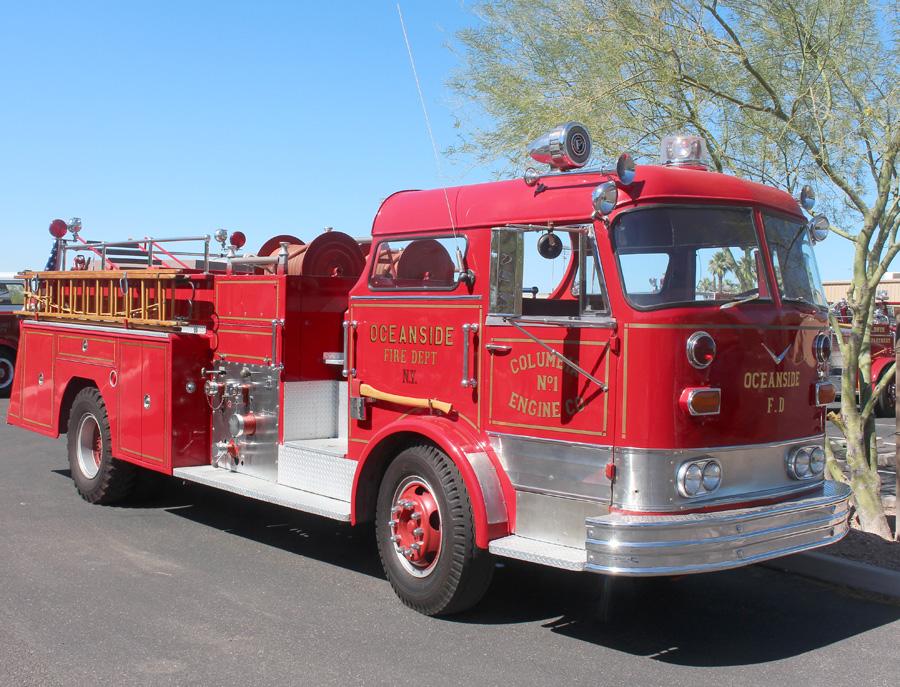 Ahrens Fox engineers designed a cab forward engine late in 1957 to compete with those of the two other builders of this type of apparatus – Crown and American La France.  Ahrens Fox made only a few of this new design before being absorbed by Mack Trucks in 1958.  Mack managers were impressed by the quality of the Ahrens Fox engine and continued to manufacture it as the Mack Model C, which continued in production until 1967.

A former Ahrens Fox salesman who had received no commissions for his sales joined the Approved Fire Apparatus Company, a New York based firm with an excellent reputation for fire engines and squad trucks.  He gave the blueprints of the Ahrens Fox truck to Approved, and in 1958 and 1959 the New York firm built seven clones, which were sold to several nearby fire departments.  Our rig went to the Oceanside FD on Long Island.  Oceanside sold it to the volunteers of Chatham, New York, who used it until 2000, when it was sold to a private collector.  In 2008 a local collector donated it to the Hall of Flame.  Don Hale, assisted by the Hall of Flame volunteers, restored the engine in 2011.

In 1972 its original Waukesha gasoline engine was replaced by a Detroit Diesel motor and an automatic transmission.  It has a 1,000 gpm Hale pump and a 600 gallon booster tank.