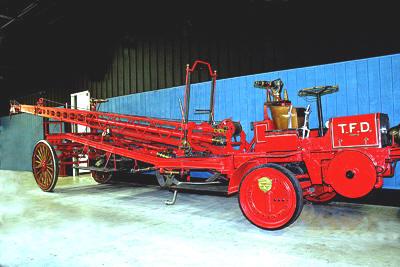 Water  towers came into use around  1880 to fight fires in multi-story buildings. Improved water supplies and steam pumpers made them possible, since they were designed to pump between 1,000 and 3,000 gpm.  This one was originally horse drawn.

The Toledo, Ohio Fire Department purchased it in 1897. Water towers were used only for large fires.  The  lack of hydraulic power to raise and extend the tower made it unwieldy and difficult to maneuver. Most departments preferred to use aerial ladder trucks equipped with play pipes attached to the end of the ladder to play water on fires in tall structures.

Although aerial play pipes could only handle a water flow at about 15% the capacity of a tower pipe, the aerial was much easier to maneuver than a tower. It wasn’t until the 1960s that hydraulically powered water towers, called snorkels or Squirts, made the water tower a truly useful firefighting tool.

In 1915 Toledo motorized its tower with a gasoline fueled tractor built by J. Walter  Christie, a noted automotive engineer.  It remained in service until 1950.