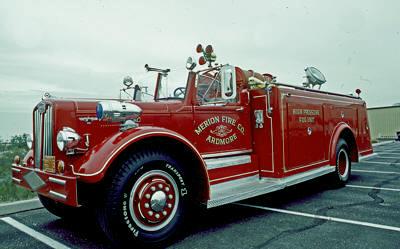 This unit has a 500 gallon tank with compartments for wet water and Class B foam. It uses technology introduced by the John Bean Company in the 1930s to spray fruit orchards with insecticides.  Bean adapted its high pressure piston pumps to fire apparatus around 1938, and the U.S. Navy employed the pumps for fire protection during World War II.   Pumped at pressures of over 700 psi, the tiny fog particles lowers the temperature of a fire scene, thus extinguishing the fire.  It does so with a minimal amount of water.  It was an ideal solution to the threat of fires in the compartments of Navy ships.

This rig is the result of this wartime experience.  It has a 500 gallon water tank that supplies a 70 gpm pump with water at up to 700 pounds per square inch.  It can be parked as close to a burning structure as possible, with no need to connect to a hydrant.  The two high pressure hose lines can be used at once.  Fires in rooms or attics of homes can be extinguished rapidly with very little water damage. The high pressure fog also worked very well at small brush fires and car fires.

During its 27 years in the Philadelphia suburb of Ardmore, the truck made over 8000 runs. Despite this heavy use, it was well kept by the Ardmore Volunteers.  It still has its original coat of paint and has been modified very slightly from its 1950 appearance.