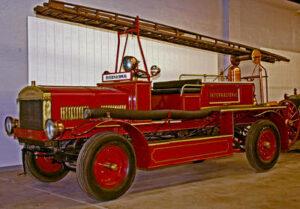 This English engine employs a novel three cylinder piston pump that  was used on English fire engines as late as 1940.  It was sold to the city of Lima, Peru in 1920, where it joined the International Engine Company 14. Retired in 1957, it came to the United States in 1979. The Museum acquired the rig in 1984, and it was restored by Don Hale in 1985.

In Peru the original hard rubber tires were replaced with pneumatics, but little else was done.  English fire apparatus was very popular with South American nations, and Merryweather, England’s oldest manufacturer, dating back to the 18th century, made very high quality apparatus.

It has what is called a Braidwood body, named after the design of a London fire chief of the 1830s, who designed horse drawn manual engines that allowed the crew to ride to a fire  atop the rig’s hose “bin”.

The design proved unsafe for motorized rigs, which could easily throw a fireman from his seat in a crash or violent turn.  In the twenties English makers introduced engines with bus like bodies that protected firemen.  A  few American makers introduced similar designs, but they were unpopular.

Closed cabs for American fire crews were not made in significant quantities until the forties, and even then many American firemen rode the tailboards or running boards of their rigs.  Accident rates from falls were very high.