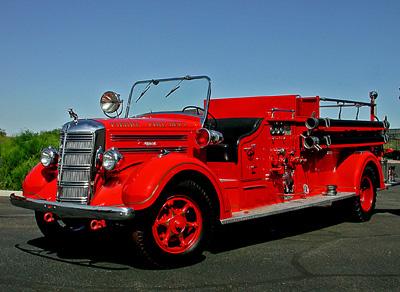 During the 1930s many cities couldn’t afford Mack’s pricey line of first class fire engines.  In 1938 Mack introduced a new line of affordable “District” fire engines.  Although based on a rugged Mack chassis, the Model 45 used a competent but lower priced Continental six cylinder engine and drive train, as well as a 500 gpm centrifugal pump.  The 45S was smaller than other Macks, but easily met the needs of small and medium sized departments.  It was built to compete with engines built on Ford, Chevrolet, and Dodge chassis. Its dual ignition  (battery and magneto) made it a first class engine, but its price tag competed with commercial chassis apparatus.  Mack sold a lot of District pumpers.  This rig was  built in 1948 for the volunteer fire department of Pierre, South Dakota.  In 2003 an Arizona businessman donated it to the museum.  Don Hale restored it to its original appearance and excellent mechanical condition.