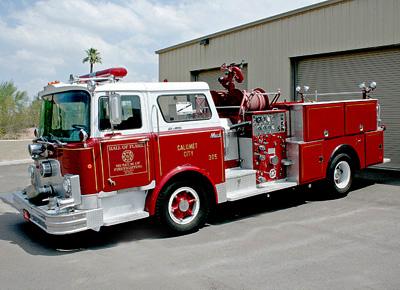 Mack fire engines have always been extremely popular in the states of the northeastern United States, especially New York and Pennsylvania, where Mack operated several factories.  This engine was Mack’s second version of a cab forward design. It was introduced in 1966 as a replacement for the Model C, which had been in service since 1958.  At one point every engine in the New York City Fire Department was a model CF.  The CF appeared in every possible configuration, from fire engine to aerial ladder truck.

This engine was used in Calumet City, Illinois from 1969 to 1999, when it was donated to the Hall of Flame.  Hall of Flame volunteers drove the rig from Calumet City to the museum with no problems.

The engine has a single stage 1,000 gpm Waterous pump, a 500 gallon booster tank, a deluge pipe, and capacity for over a thousand feet of hose.

Power comes from a V-6 Thermodyne diesel engine. It is a canopy cab design with seats for two firefighters in front and two firefighters on jump seats.  Its compact design and relatively short wheel base make it quite maneuverable for a first line fire engine.