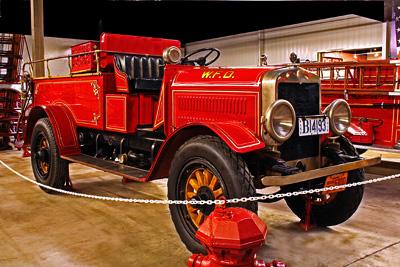 Museum member and volunteer Jeff Trevas recently donated his nicely restored one of a kind New England Truck Company hose truck once used by the fire department of Worcester, Massachusetts.

NETCO, of Fitchburg, Massachusetts, built commercial trucks between 1914 and 1938, including a few pieces of fire apparatus.  Jeff has done quite a bit of research on the truck.  It was built in 1916 on a Model F chassis as a hose truck for the Worcester Fire Department at a cost of $2,450.  Its original engine was a Continental straight four.

Worcester is fairly hilly, and the truck had difficulty getting around town.  In 1930 the WFD did an extensive rebuild.  They managed to squeeze a six cylinder Continental engine into the little truck.  They also added a thirty gallon booster tank below the officer’s seat and piped the water to a PTO driven 75 gpm  rotary gear pump.  Lastly they installed a hose basket from a surplus rig and filled it with booster hose to supplement its 500 feet of 2 1/2 inch hose .  The truck was retired sometime during the 1950s.

Jeff has completed a fine restoration.  The truck is in excellent running condition.