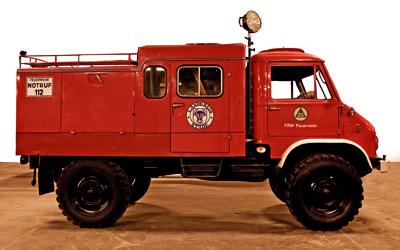 During the bombing campaign of World War II, the German Fire Service found that its two wheel drive fire apparatus often couldn’t negotiate bombed out streets.  As a response, during the Cold War the Federal Republic’s Department of  Civil Defense built hundreds of engines like this on the chassis of the German Army’s  tactical vehicle, the Mercedes “Unimog”.

It’s the smallest of Germany’s standard fire engine sizes, with a 300 gallon water tank, a  300 gpm pump, and an amazingly wide variety of tools, hose, and fittings.  It also tows a trailer equipped with a foam tank for use at electrical and oil fires. These all-terrain engines were given to volunteer departments for everyday use. If war came to Germany, the volunteers were automatically drafted for service with the German Army.

This rig spent its 24 year working life in the northwest German towns of Stade and Cuxhafen.  It has a V-6 gasoline engine and a three range all wheel drive manual transmission, oversize wheels, a forty gallon fuel tank, and escape hatch, and fording gear that will allow it to operate in up to six feet of water.