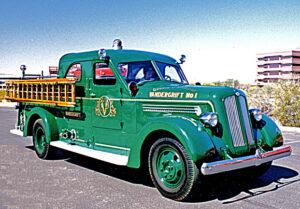 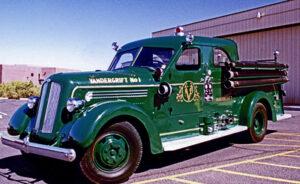 Seagrave copied the ideas of the English Fire Service in its design of this fire engine.  During the 1920s many English firemen were thrown from their engines in accidents or collisions with other vehicles.  The English responded with bus – like fire engines with closed cabs and crew compartments.

Seagrave built this engine to provide similar protection for American firemen.   The design was not popular with American fire departments, though Seagrave built them for over 10 years.  During the 1960s the increased concern with safety, coupled with attacks on firefighters during riots, finally led to the acceptance of closed cab engines with crew compartments.

This piece was originally built for the Volunteer Fire Department of Vandergrift, Pennsylvania. It later  served in the ALCOA Industrial Fire Department near Pittsburgh.  It was restored by Don Hale in 1999.

The engine uses a V-12 gasoline motor based on the Auburn V-12.  It has a 750 gpm two stage pump and  a 300 gallon booster tank.  Seagrave originally built  an alley in the center of the hose bed that allowed firemen to proceed to a seat atop the booster tank and under the cab’s canopy, which they could safely ride to the fire.  The Vandergrift Fire Department got rid of this alley to make more room for hose and extended the width of the rear tail board or “step”, allowing firemen to “ride the step” to fires in the perilous but traditional fashion.

The Vandergrift Fire Department traditionally painted its equipment a dark green.  Seagrave was happy to oblige.

Don restored the truck to its original configuration.