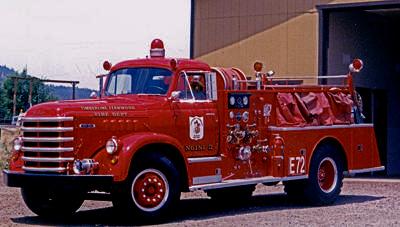 In the summer of 2001 we received the donation of a 1952 Van Pelt fire engine from the fire department of Timberline – Fernwood, Arizona.  This community lies a few miles north of Flagstaff, on the main highway to the Grand Canyon.  The Flagstaff FD originally purchased the rig from Van Pelt.

Van Pelt was the West’s largest maker of fire apparatus, with a reputation for quality.  Our rig came with a big 900 cubic inch Hall-Scott gasoline motor and a Hale 1250 gpm single stage pump.  It also came with a Hardie high pressure fog pump with two delivery hoses, and a 500 gallon booster tank.

During the 1990s the firefighters of Timberline – Fernwood repainted the rig and removed the bumps and dings acquired during its long service life. With it looking so nice, they hated to take it out on brush fire runs in the woods.

The rig was approaching its 50th birthday, an advanced age for first line fire engines.  The decision was made to donate it to the Hall of Flame.  A Timberline – Fernwood firefighter drove the rig from Flagstaff to a firefighter workshop in Mesa, Arizona, where it was placed on display.  Following the display Hall of Flame volunteers and staff drove it to the museum in nearby Phoenix.

We’re glad to have a rig that was built by Van Pelt, especially with the Hall-Scott engine, which was highly regarded for power and reliability by western fire departments. We’ve also been looking for a chassis by Diamond T, which is regarded as one of the premier American truck builders.

Beyond a few accessories, some minor paint work, and new upholstery for the driver and officer seat, the piece is in top condition.  It is pictured above at the Timberline – Fernwood storage building.