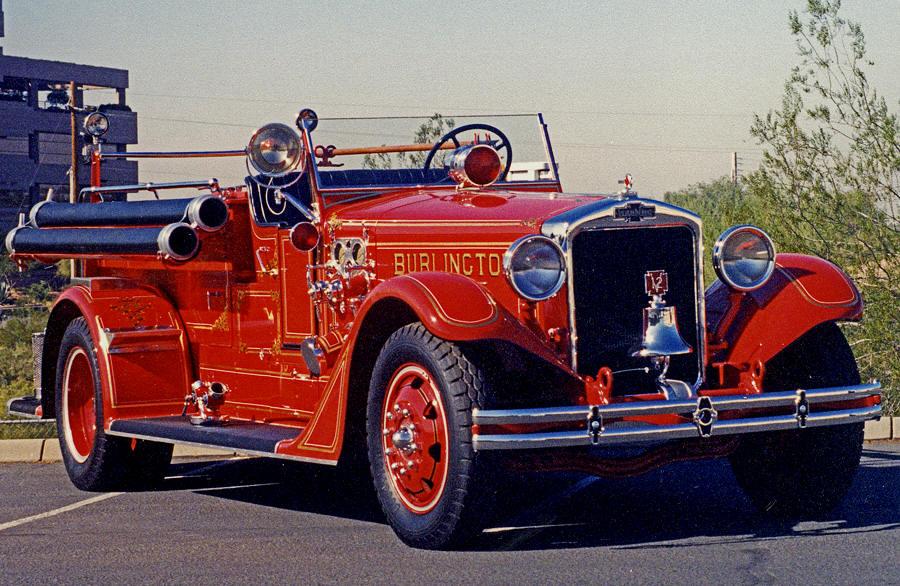 The earliest motorized American fire engines, which appeared around 1910, used an engine called the T-Head:  a single row of four to six pistons  were cast in sets of two in the shape of a large “T”.  One side of the T contained valves for the fuel intake, and the other side had valves for the exhaust.  It was a simple matter to remove the valves, and the twin cylinders could also be disconnected from the engine’s crank case.

T-heads were easy to repair but operated at a fairly low RPM, which made it difficult to match to the speed of a centrifugal pump. They were also expensive to build because of the difficulty of casting the pairs of cylinders without flaws.

During the late 1920s and early 30s new engine designs appeared—the L-Head and the V-Head.  L heads were more compact and employed less expensive cylinder heads.  V’s arranged their cylinders in two banks which greatly reduced the length of the crank shaft.  This engine uses a V-12 engine which was designed in 1931.

The American La France Type 400 Senior appeared in 1934 as the nation’s most advanced fire engine, with powerful pumps and the huge, powerful V-12 motor.

Of equal impact was the engine’s design, which was based on the styling of the elegant Packard, Cadillac and Duisenberg automobiles of the 30s. Less than 200 of the pricy rigs were built between 1934 and 1938, when La France introduced a new model.

This engine was used in Burlington, Iowa and was completely restored by Mr. Bernie Lowe.  Bernie donated the rig to the Hall of Flame in May of 2009.