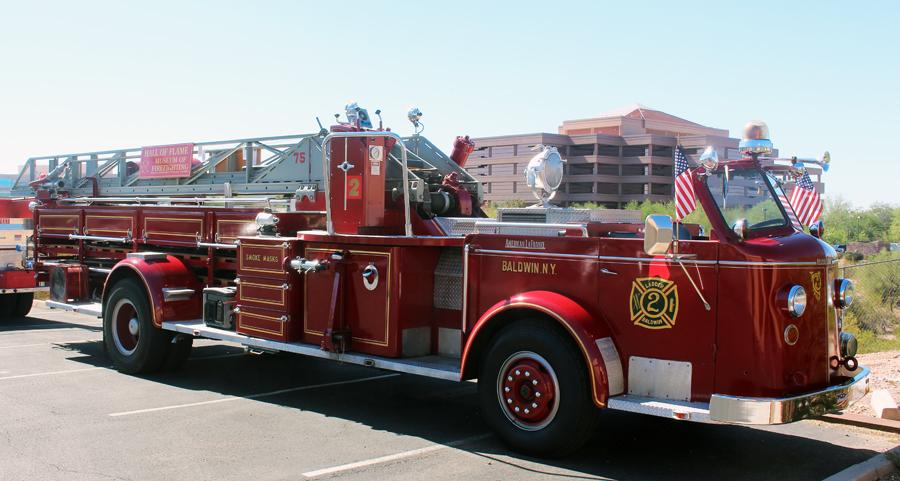 The volunteers of Baldwin, New York put this Model 700 aerial truck into service in their Long Island town in 1955.  Twenty years later they sold it to the town of Lynnfield, Massachusetts.  In 2000 the town of Lynnfield donated the truck to the Hall of Flame.  Its 45 years of front line service is a testimony to the quality of its design and construction.

The truck was designed for a volunteer department, so it has a number of compartments for each firefighter’s helmet and equipment.  The truck would often be driven to a fire with just a few of its crew, with the remainder joining the truck at the scene, donning their turnouts, and going into action.

Its 75 foot aerial extension ladder could be put into action very quickly.  The ladder, or “stick” could be used to gain access to upper stories or a roof for ventilation and rescue.  It’s “ladder pipe” could also be connected to a 2 ½” hose and used to play large quantities of water from high above the ground.

It carried a wide range of accessories, including a generator to provide electricity for power saws and a positive pressure fan/smoke ejector, and a wide variety of extrication tools, axes, and  pike poles.  It had a compartment for the canister equipped breathing masks that were popular until the 1960s, when the far more capable self contained breathing apparatus took their place.

During the 1990s the Lynnfield Fire Department replaced the rig’s original gasoline engine and manual transmission with a powerful diesel engine and automatic transmission.  This improvement made driving the rig much easier and increased its top speed from about 45 mph to well over 60 mph.