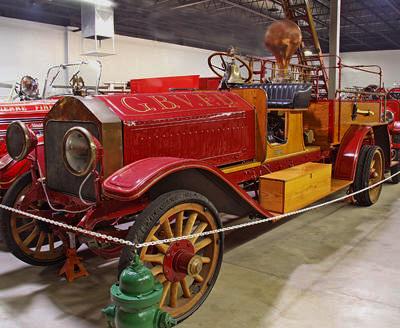 In October of 1998 the Hall of Flame received a rare Robinson fire engine on loan from the town of Gila Bend, Arizona.  The rig was purchased from the St. Louis manufacturer in 1915 by the mining town of Globe, Arizona, and sold to Gila bend around 1940.  After a few years it was retired and left in storage.

In 1993 the firefighters of Gila Bend began its restoration, and the project was completed in 1997.  It has a 1,000 gpm rotary pump and a large hose bed.  It apparently did not have a chemical tank.   It is powered by a 1,000 cubic inch six cylinder T-head engine.  Only one other Robinson engine is known to be in existence.  It is owned by the town of Staunton, Virginia, and has been fully restored.