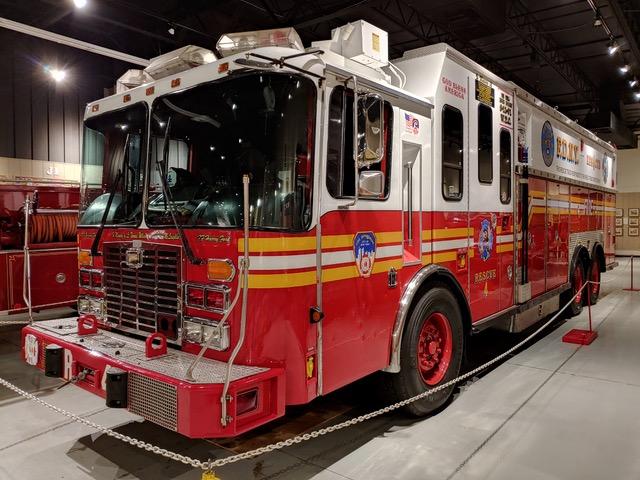 The first FDNY rescue company was organized in 1915. The rescue company’s original primary job was to rescue fellow firefighters that were in jeopardy in a fire. Over the years their job expanded into the handling all out of the ordinary emergencies that included large ‘working’ fires, building collapses, train wrecks, water rescues, high angle and trench rescues and certain catastrophic medical emergency’s among many other high profile incidents. Four more rescue companies were founded and added in the New York fire department in the years that followed. FDNY Rescue Company 4 was organized on June 1st, 1931 and still serves in  Queens County in the City of New York.

Their members are considered the ‘elite’ of their trade, and to become part of a rescue company you can apply only after demonstrating a certain amount of firefighting experience within the department.  After applying, the rescue company captain will only select the most highly motivated individuals that are deemed knowledgeable enough to join the ranks of these elite companies.

This HME Saulsbury apparatus was one of five identical rigs purchased for all of the New York rescue companies in 1996, and is best described as a ‘rolling toolbox’. This apparatus not only carries its members to calls, but also thousands of pounds of their ‘tools of the trade’ as well.

In the year 2001 this particular rig responded and carried its members to two notable very and tragic fires. The first was best known in the FDNY as the ‘The Fathers Day Fire’ that occurred on June 17th, 2001, a multiple alarm fire in a large hardware store located in Astoria, Queens. While fighting the blaze the building exploded from illegally stored propane gas, trapping two of the Rescue 4 firefighters in the collapse. Although valiant attempts to save their lives were made, both rescue men ultimately died from their injuries.

The members of Rescue 4 were still reeling from this tragedy when the unthinkable happened again. On Sept 11th, 2001, the World Trade Center twin towers were attacked by terrorists. Rescue 4 was called to respond to the scene along with the all of the other four New York rescue companies. This rig carried eight firefighters to the scene and when the towers collapsed, every one of firefighters that responded on this truck, and all the other FDNY rescue company trucks, died in the line of duty while performing an incredible act of bravery rescuing the many victims trapped in the burning buildings. The bodies of two of the men from Rescue 4 were never found.

Of the 5 matching rescue trucks, only this rig survived with minimal damage, and it went back into service shortly thereafter serving with the FDNY until 2011. It was ultimately saved from the scrap yard, restored and is now on permanent display here at the museum where it remains as a living memorial to all its occupants selfless acts of courage on that horrible day in U.S. history.